Typical IMS Failure Mileage: Really Anytime – The lower the mileage the worse off you are from our experience. DO NOT SAY I WISH I WOULD HAVE DONE THIS! 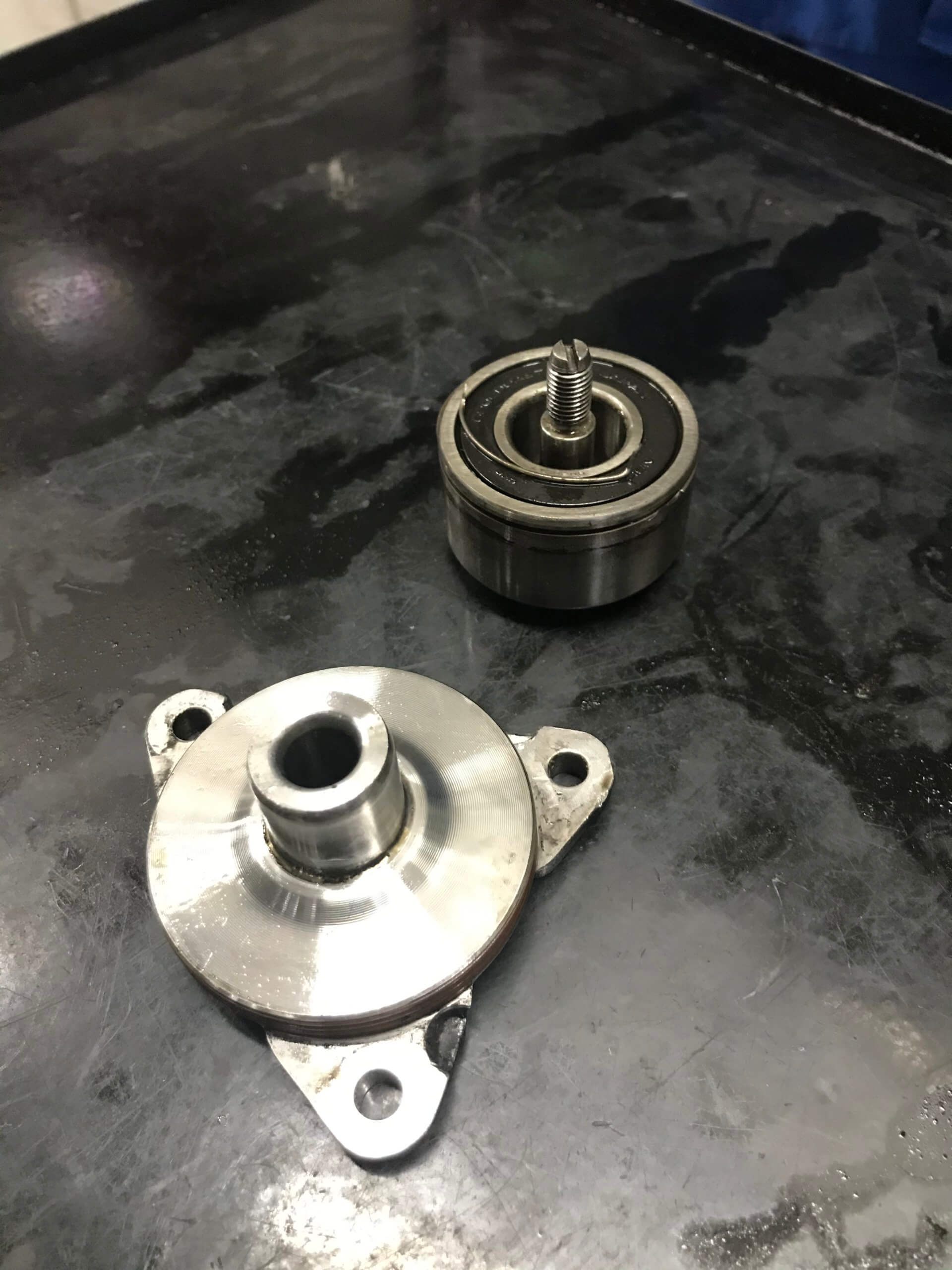 An intermediate shaft has been used ever since Porsche developed the air-cooled 911 engine, starting in 1965 with the 2.0. This basic design was used throughout the entire lifespan of the air-cooled sixcylinder Metzger engine used through 1998.

The same design has been retained with the water-cooled Turbo, GT2, and GT3 models as their engines are based off the same 964 engine case with the same internals as the earlier air-cooled engines. This intermediate shaft features plain bearings that are pressure fed engine oil for lubrication and never fail. If these bearings wear out, an engine may develop a slight knocking noise due to increased running clearance, but this condition will almost never result in a catastrophic engine failure.

When the M96 engine was developed, for cost savings, one cylinder head casting was made. As such, for interchangeability, the camshafts could no longer be driven off one end of the IMS. This required that the chains be driven off opposite ends of the intermediate shaft. 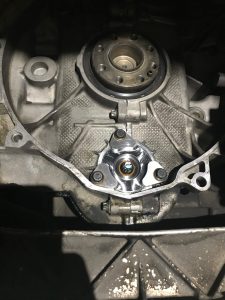 Unfortunately, due to how the crankcase was designed there are no oil passages from which pressurized engine oil can be used to lubricate a plain bearing on the side closest to the flywheel. As a result, a sealed ballbearing was used on the opposite end of the IMS (closest to the flywheel). Additionally, it is this ball-bearing that handles the majority of the load on the intermediate shaft.

The intermediate shaft found in the M96 and later M97 engine was revised three times. The earliest design incorporated a dual-row ball-bearing used through model year 1999 and in some 2000 and 2001 models. Starting in model year 2000, a single row ballbearing with a significantly reduced load capacity was used. By model year 2002, all engines used this smaller, lower capacity bearing. Starting with the 2006 model year, the design was again revised to use a much larger single row bearing with the same load capacity of the early dual-row ball-bearings. In all revisions, a sealed ballbearing was used, rather than allowing for engine oil to lubricate and cool the ball-bearing. There is no recommended service interval for these bearings or provisions for their replacement from the factory.

By far, the single row ball-bearing used starting in model year 2000 through 2005 is the most problematic. Based on projections calculated by a fellow Porsche enthusiast and retired bearing engineer from Timken, they figure a 90% survival rate of the single-row 6204 ball-bearing used in the IMS at 90,000 miles* – resulting in a staggering 10% failure rate (called the Ll0 life)! *Assuming an average speed of 60mph in top gear. This coincides with the high number of failures we see in these model years. Regardless, all M96 and M97 engines from 1997 through 2008 can suffer intermediate shaft bearing failures at any mileage and at any time.

In addition to ball-bearing failures the intermediate shaft can suffer other failures including but not limited to slippage of drive sprockets which can lead to valve timing related failures. Again, as a cost saving measure, the sprockets were not secured to the intermediate shaft. The center bearing support stud was manufactured with an O-ring groove cut into it, reducing its cross-sectional thickness to less than the diameter of the threads used to secure the IMS bearing assembly. As such it is common to have the center bearing support stud break during operation, resulting in a large oil leak, and is often an indicator of a failing or failed IMS bearing. 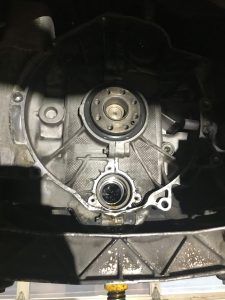 It is not known exactly why these bearings fail but there are many contributing factors including over-loading. Poor lubrication, long drain intervals, high fuel and moisture content in the engine oil, high oil temperatures and even operational speeds can affect bearing life. That’s why some bearings last 3,000 miles and others have lasted over 200,000 miles.

One thing is for sure – once you have experienced an IMS bearing failure there is no turning back. A complete engine disassembly is required to replace the intermediate shaft and in most cases complete rebuild or engine replacement is your only option costing thousands of dollars sometimes exceeding the Porsche market value.

LN Engineering currently offers a dual row IMS Retrofit as well as a single row IMS Retrofit in which the engine does not have to be disassembled to replace the factory sealed ball-bearing on engines up to very early 2005 but mainly up to 2004.  Also ask about the new IMS Solution which is a more permanent solution for your Porsche engine.

LN Engineering also offers a MY06-08 IMS Retrofit kit for the larger bearing found on model year 2006 through 2008 M97 engines, but engine disassembly is required for installation. LN Engineering also offers an IMS Upgrade service where you send in your intermediate shaft and it is upgraded to a triple row bearing (with exception of MY06-08). Additionally, the main drive sprocket is pinned to prevent slippage of the drive gear which is a known problem area. Carmine has a service for the 2005-2008 cars to prolong the life of the existing bearing and give it a visual check so call us for details. Ultimately fixing the problem is the answer. 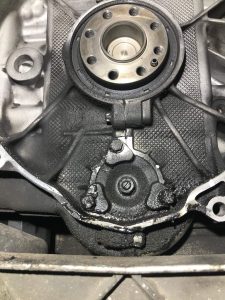 Considering all three revisions of the IMS found in the M96 and M97 are known to fail, we know the use of a ball bearing was a manufacturing constraint and a poor choice. That said, even the addition of a ceramic hybrid ball bearing with its superiority over conventional ball bearings does not eliminate completely the chance of failure. With zero failures of our dual row IMS Retrofit, triple bearing IMS Upgrade, or even with our upgraded ceramic hybrid bearings used in the model year 2006 through 2008 intermediate shafts, we have almost a perfect track record, however there have been about a dozen single row IMS Retrofit kit failures. However, we still have a 99.9% success rate even considering some of these failures are due to improper installation (“The shop that offers you the deal”) or are collateral damage from other failures (there are dozens of confirmed modes of failure for the M96 and M97 engine that can damage or cause your IMS bearing to fail).

Knowing the single row bearing is undersized for this application, we recommend replacement every 4 years or 50,000 miles, the single row pro every 75,000 miles or upgrade to the newer IMS Solution package. Your Porsche will be required to have a pre-requisite inspection to make sure the engine is in good enough shape to have the retrofit installed. This requires minor checks of timing and debris in the engine.  One you are in the clear we can proceed and not waste your money. This protects you from installing a retrofit in an engine that is too far gone and is also part of the IMS Retrofit Code of Ethics. Carmine says to please be aware of non-certified shops installing inferior products posing as the real thing, especially your dealerships. If a shop is installing a bearing for $1500 you may want to keep calling around. This is not a job you want to cheap out on. There are plenty of turkey shops in the North Carolina area so Carmine is giving you fair warning. Also keep in mind that there are other items to protect your Porsche engine from complete destruction such as preventive maintenance, water pumps replacements, cooler thermostats, oil filter upgrades, and more.