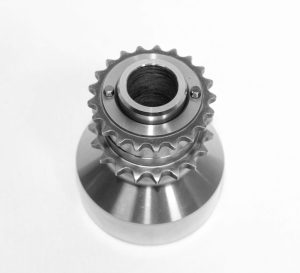 The original flawed design allows the timing gear to spin independently from the crank, especially when the motor is modified by tuners that don't have your best interest in mind. Best case scenario the motor needs to be re-timed with new components. Worst case, the valves contact the pistons requiring a complete overhaul. Common symptoms are rough running and camshaft angle deviation faults. This crank hub uses OEM gears and hub machined and pinned to prevent slipping. Metallurgy is superior to most aftermarket sprockets on the market.

The S55 engine is not designed to take a large increase in boost beyond the OEM spec. Due to the design of the crankshaft, it is known to have the timing chain sprocket spin on the end of the crankshaft, causing the cams to go out of time.

If you are planning a large power increase with bigger turbos, CarBahn Autoworks has designed a high-performance engine to handle very high outputs by pinning the cam sprocket to the crankshaft. Get it installed at Carmine's Import Service. Don't try this at home.